MOOSE implements a whole new enhanced mechanism to create virtual cargo within your missions. Within this new system, virtual cargo can be represented by:

In order to use the new MOOSE cargo management, system, you’ll need to declare cargo objects as part of your mission script, and setup either an AI or a human cargo (task) dispatcher to transport this virtual cargo around the battlefield. For this, several MOOSE classes have been created for cargo dispatchment, which are listed below.

Click on each individual MOOSE class for detailed features, usage explanations as part of the detailed MOOSE documentation.

The MOOSE warehouse concept simulates the organization and implementation of complex operations regarding the flow of assets between the point of origin and the point of consumption in order to meet requirements of a potential conflict. In particular, this class is concerned with maintaining army supply lines while disrupting those of the enemy, since an armed force without resources and transportation is defenseless.

Please note that his class is work in progress and in an alpha stage. 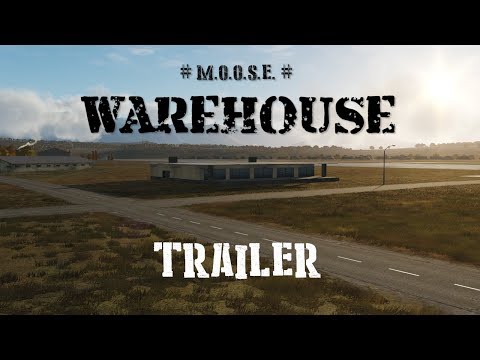 This section details the classes that you can use to setup an automatic cargo dispatching system that will make AI carriers transport cargo (automatically) through the battlefield. Depending on the type of AI unit types, various classes are implemented.

However, this class is the BASE class and contains the main functionality for the underlying more detailed implementation classes. So, please read the documentation of the AI_CARGO_DISPATCHER class first (by clicking on it!)

Models the intelligent transportation of infantry and other small or lightweight cargo using APCs or trucks. This class models cargo to be transported between zones!

Models the intelligent transportation of infantry and other small cargo using Helicopters. This class models cargo to be transported between zones!

Models the intelligent transportation of infantry, vehicles and other heavy cargo using Airplanes. This class models cargo to be transported between airbases!

Also humans can achieve tasks by to transporting cargo as part of a task or mission goal.

The TASK_CARGO_DISPATCHER allows you to setup various tasks for let human players transport cargo as part of a task.

The cargo dispatcher will implement for you mechanisms to create cargo transportation tasks:

A complete task menu system to allow players to:

A complete mission menu system to allow players to:

The following section provides a detailed explanation on the cargo system, how to use etc.

MOOSE has implemented a separate system for cargo handling. It combines the capabilities of DCS world to combine infantry groups, cargo static objects and static objects as “cargo” objects. Cargo classes provides a new and enhanced way to handle cargo management and transportation. In order to use these MOOSE cargo facilities, you’ll have to declare those groups and static objects in a special way within your scripts and/or within the mission editor.

The main CARGO class is the base class for all the cargo management. It contains the required functionality to load / board / unload / unboard cargo, and manage the state of each cargo object. From this CARGO class are other CARGO_ classes derived, which inherit the properties and functions from CARGO, but implement a specific process to handle specific cargo objects! It is not the purpose to use directly the CARGO class within your missions. However, consult the CARGO documention as it provides a comprehensive description on how to manage cargo within your missions.

Management of moveable and grouped cargo logistics, which are based on a GROUP object. Typical cargo of this type can be infantry or (small) vehicles.

Management of single cargo crates, which are based on a STATIC object. Typical cargo of this type can be crates, oil barrels, wooden crates etc. The cargo can be ANY static type! So potentially also other types of static objects can be treated as cargo! Like flags, tires etc.

Management of sling loadable cargo crates, which are based on a STATIC object. This cargo can only be slingloaded.

Management of moveable units, which are based on a UNIT object. Note that this is an Internal class and is only mentioned here for reference!